Scott begins this episode by explaining that ‘Digital Nomads’ are individuals who leverage telecommunications technologies to perform their work duties, and more generally conduct their lifestyle in a nomadic manner.  He explains that technology’s furious pace of development has quickly upended how we live, travel, and work. It’s made businesses and lifestyles possible that weren’t just a decade ago.  Scott then explains that the episode will feature two guests who will talk about how they’ve embraced technology to make a working/traveling lifestyle possible.

Trevor and Scott then talk about their own experiences living Digital Nomad-esque lifestyles.  Trevor explains how, for coming on a decade now, he’s been predominantly employed as a freelance travel writer, based in Bangkok but occasionally renting rooms in neighboring countries to set up temporary bases to work out of.  At times he would live in Bangkok, work in Cambodia, and study in Vietnam.  He explains how he has experienced first-hand the benefits and drawbacks of living the nomadic lifestyle, but he’s also old enough to have traveled in the days before smart phones and internet and can’t imagine how he could have lived this lifestyle without modern technology.

When Scott first moved to Thailand in 1999 to start Smiling Albino, the company had dial-up internet, one bulky desktop, and a service offering free calls called ‘Dialpad’ came out.  Since then Internet speeds quickly got better, Skype became mainstream technology, PayPal helped them manage overseas payments, VOIP lines enabled them to chat with potential customers, and he could interview and chat with guides around the region for free on Skype. It literally made their business possible.

Trevor then says that, because he’s not a computer programmer or employed in computer-related professions as many digital nomads are, perhaps he should call himself a ‘Location Independent Professional’, as some also do, but thinks that the title ‘Digital Nomad’ can include anyone who simply utilizes technology to live an itinerant lifestyle.

Scott and Trevor wrap up the introduction discussing how young freelancers and older entrepreneurs can use these technologies to work nearly anywhere in the world, setting up shop in temporary homes or utilizing co-working spaces, which can be found across the region, from Singapore to Yangon and Seminyak to Phnom Penh.  Scott then introduces the first guest of the episode: Gary Arndt. 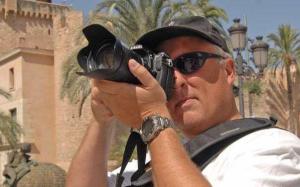 Gary has been a digital nomad since 2007. He sold his business in 1998 to a multinational, then in 1999 he was sent on a whirlwind trip to their various offices around the world, which got him thinking about traveling. In 2007 he got serious, sold his house, put personal items in storage and has been traveling the globe ever since. He’s been to all seven continents and 170 countries. Today he’s an accomplished photographer, despite not having pro skills when he set off on this new life. Time Magazine listed his blog as one of the Top 25 Blogs in the World in 2010.

Gary explains that he is currently in Spain, where he will be based for around two-and-a-half-months before heading off to Alberta, Canada to shoot some photos.  He then explains that he is a true nomad with no regular home that he is based out of; he jokes that if someone wants to send him some mail they would need to digitize it and email it to him.

Scott asks about Gary’s early years and what type of work he did to get himself started.  Gary explains that he sold his business and house and lived off of those funds for four or five years to get himself established in his nomadic lifestyle.  He devoted his time to building up his authority as a travel expert and establishing an audience once he realized that traveling was going to be his long-term goal. 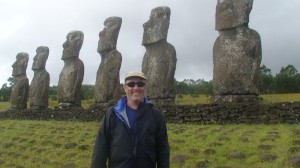 Trevor then asks Gary about his job title and Gary suggests he’s a blogger/photographer although he believes he could still earn a living from travel without his blog because of his large following on Facebook, Instagram, Twitter, and other social media.  Trevor asks where his income comes from and Gary explains that he earns his living through sponsorships, speaking engagements, and leading tours rather than the more ‘traditional’ online revenue streams, such as advertising and affiliate links.  Gary then explains that he is currently working on a book, a podcast, and an online travel photography training course, in addition to his blog and photography assignments.  He talks about his most recent travels and partnerships that have sponsored those explorations.

Trevor asks about his work habits while on the road and Gary then talks a bit about his ‘typical day’.  He talks about how his travel schedule is somewhat dictated by connectivity issues and how certain locations are more conducive to the lifestyle.  He also explains how having an assistant who is based in the US aids him in executing his work more efficiently.  He explains that, because he travels so much (40 countries in 2014 year alone), having the stability of an assistant who is in a fixed location is a great asset.

Scott asks about how Gary keeps up with rapidly changing technology.  Gary talks about how he set out on the road before the iPhone and how he has transitioned from utilizing a host of gadgets to a much more streamlined collection of tools to help him with his trade.  Scott asks Gary about advice he could give others looking to transition to this sort of lifestyle and Gary immediately suggests people do not jump right into it thinking they can make a living as travel bloggers.  As it took him a decade to establish himself and he funded himself for many years he says it’s extremely difficult for people to succeed in this field.

Trevor supports the idea that the reality is much more difficult than the dream.  Gary agrees that while he believes people should travel, most people would not enjoy the lifestyle of a travel blogger.  Gary then talks about the travel and tourism industry; how it’s one of the largest economic sectors in the world.  He feels that, while there is a lot of room for his business to grow, there is still room in the market for people who are willing to get into the industry.  Gary then talks about some of his more challenging travel experiences, prompted by Trevor who asks about a quote on his website.  Gary talks about these experiences in Cambodia and Kiribati. 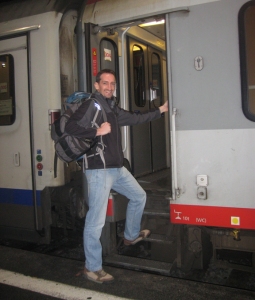 Scott introduces our next guest, Niall Doherty, a nomadic Irishman and self-professed disrupter of things, who is dead set against the rabblement, including watching TV regularly, eating lots of processed food, not reading actual books, working an unfulfilling job, buying lots of useless crap, and not offending anybody.  In 2007 Niall left his native Ireland, lived in the US for three years, returned home, then headed off again in 2011 for Asia. Since then he’s been living, working on projects, and keeping himself busy outside of his native land.

Niall greets our hosts from his current location in Columbia and explains where his travels have taken him over the past four years.  He is attempting to circumnavigate the globe without using air travel and has visited around 30 countries since he left home in 2011.  Although it has been the adventure he was looking for he jokes that he doesn’t recommend it to anyone.  He recently traveled from Asia to South America on a cargo ship: a rough 26-day journey.

Niall talks about the year he spent in southeast Asia, primarily based in Thailand, which was conducive to his work.  Niall explains that he’s not really on holiday as he is a self-employed, web-based professional who holds down what he considers a full time job.  Niall explains that, because he can work on his computer, he can really work from anywhere in the world and so decided to take his office on the road for a few years.

Scott raises the issue of technology allowing people to live nomadic lifestyles and Niall explains that, while he works as a freelance web designer, he has made friends around the world who do a variety computer-based jobs that similarly allow them to travel as they work.  Scott asks about how technology has helped Niall live his digital nomad lifestyle.  Niall talks about how fast and reliable Internet access has really helped him do his thing.  Scott asks about co-working office spaces and Niall says these are useful to him because they offer the fastest Internet connections and because they offer a sense of community of likeminded people.

Scott then asks about the tools Niall uses.  Niall utilizes Skype video chat to meet with his clients and Google Drive for storage as travel opens him up to the risk of theft or damage of his work.  Scott then asks about scheduling to which Niall describes his sense of balance, not working for a week or two followed by a week or two of knuckling-down to bang out lots of work when he is in a location that is conducive to ‘office hours’. 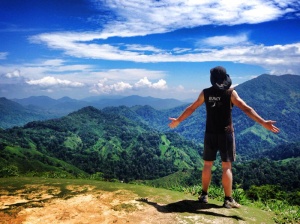 Spectacular views on the way to La Ciudad Perdida, Colombia

Niall then talks about motivation and locations that have been the best and worst places to get work done.  Niall mentions Thailand and Romania as places that offered good online infrastructure and Iran as a challenge as his website was oddly blocked in that country.  Niall talks about how there are average internet speeds listed online and mentions websites that offer advice for cities that are conducive to digital nomads.  He explains how he uses certain hotel booking sites to help him find places to stay that offer good connectivity and how useful that is to staying on top of his work.

Niall then talks about his upcoming travel schedule and his plans are for the near future.  He plans to travel to eight more countries on his way home, stopping along the way in New Orleans for Mardi Gras.  He plans to get up to North America by sailboat and then take a cruise ship back to Ireland.  He then plans to set up shop in Amsterdam for a year or so explaining that he really appreciates being set up in one location for a while after living on the road for so many years.