Introduction: Scott and Trevor are back together to record Episode 17, this time at the FCC Bar and Restaurant in Phnom Penh, Cambodia. Trevor introduces the episode by explaining that Scott and he are no strangers to the nightlife scene. In fact, while he only devotes a portion of his travel writing to nightlife venues, people seem to think that he is an expert on every place to go for a drink in every destination he’s ever been. So as not to disappoint his fans, he has tried to keep on top of the scene in every area he hangs out in and Scott has been an indispensable resource in this regard. 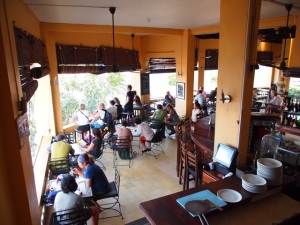 Inside the FCC’s 2nd Flr

there. When you hit bars and spend some time in them, you also meet some of the most colorful locals around, get insider info, and usually end up having a hell of a time. After describing their current location, the FCC, which is one of the watering holes on their list, Trevor explains that on this episode they will be sharing some of their favorite watering holes throughout the region, some well known, some well off the beaten path, but all a ton of fun to enjoy tilting glasses or bottles in.

Cambodia: Although he feels it’s arguably the most popular meeting point, Happy Hour venue, and riverside restaurant in Phnom Penh, The FCC is, according to Trevor, like the ex-girlfriend you don’t like anymore but can’t say no to when she booty calls you. The FCC occupies the 2nd and 3rd floors of a river-facing building along Sisowath Quay in the heart of the tourist district of Phnom Penh and Scott agrees that it is, in itself, a major tourist destination, with great ambience, a tasty menu, historical cache, nice views of the riverfront, and a pretty decent menu. They then talk about the building’s history and its place in film and Cambodian history, elements that add to the ambience. 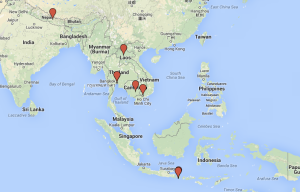 Click on map to see where our favorite watering holes are

Thailand: Trevor thinks they could fill a few episodes purely on Bangkok watering holes but thought they could touch on a few favorites. The first is Cheap Charlies. Scott calls Cheap Charlies a legendary watering hole, giving a bit of history of the bar started by Sathit and his brother (now deceased) Charlie around 20 years ago. Scott heard that drinks started at 30 baht (less than $1) back in the day and are now 70 baht (just over $2). There are always people there and it’s got a great dive bar atmosphere: kitsch, classic rock, and a diverse and always large crowd. Trevor agrees that it’s a bit of an open-air dive bar. 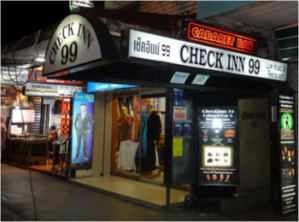 The entrance to a strange place

Trevor decides to stay in the area around Sukhumvit 11, where Cheap Charlies is located, and picks a bar that was mentioned on an earlier episode with Greg Jorgensen: Check Inn 99. Scott states that Check Inn 99 is on the bizarre end of the scale, reminding him of the Regal Beagle from TV’s Three’s Company with a tiki bar vibe. He describes it as featuring a small waterfall with some aging hostesses and waiters in white shirts and bowties – a true throwback. Trevor says he once recently saw the waiters dressed in colorful dinosaur costumes and talks about how the bar, which has been around for 50 years – once hosting Bob Hope – has remained relevant to the nightlife scene by featuring the Vagina Monologues and screening The Rocky Horror Picture Show. Scott reminds us of Greg’s comment that the building was the city’s first ice factory back in the day.

Before moving on from Sukhumvit 11, Trevor mentions Above Eleven at the Frasier Suites Hotel as one of Bangkok’s best rooftop bars. Scott states that you need to dress up for Above Eleven more so than at Cheap Charlies, and the two talk about a few other Bangkok rooftop bars they like, including Moon Bar/Vertigo at the Banyan Tree Hotel, and one they don’t: Sirocco at State Tower.

Scott then takes us north to Chiang Rai, where he talks about one of his favorite watering holes: Teepee

All that is Teepee

Bar. Scott enjoys the bar not only for its drinks but also for the company of the proprietor, Too, who has run the bar for over 20 years. Scott describes Too as a true hippie character and very kind soul. He takes in friends to work for a while, helps with food, etc, and there are always some ‘interesting’ people in his bar. After 19 years near the Night Bazaar, Too had to relocate a few blocks away but Scott feels that he has done a remarkable job of recreating the magic with bikes hanging from the ceiling, odd things here and there, and great music – from Kenny Rogers, to Led Zeppelin and everything in between: you never know what you’ll hear.

Bali: Trevor explains that it was hard to pick his favorite watering holes in Bali as the island has such a sophisticated and diverse nightlife scene. One of his favorites, for certain however, is Potato Head Beach Club in Petitenget/North Seminyak, which he describes as the ultimate high-society-meets-hipster beach bar/restaurant. Potato Head is everything you could want in a single venue, he explains, and while most are impressed by Potato Head’s design before they even set foot in the building, Trevor says that he mostly enjoys sunset cocktails at the beachfront pool bar.

He then talks about the scene down by Uluwatu surf break on the Bukit peninsula, where a number of bars and restaurants are perched on the cliff-side overlooking the waves. Trevor likes to start with post surf, pre-sunset beers at Dephi Rock Bar, the nearest bar to the water, for its cold drinks, inexpensive food, and spectacular view. Come sunset, especially on Sundays, he then head ups the hill to Single Fin, the premier surfer bar overlooking the Uluwatu line up. Single Fin is a surf shop and cafe as well as the official party venue for surf contests held at the world-famous break.

Nepal: Scott states that while there are a bunch of great venues to visit in Kathmandu, Jazz Upstairs is the spot that stands out most in his mind. Scott says that the bar is run by a man named Chudrup, and that Jazz Upstairs was originally quite a rough-around-the edges-spot on Lazimpat. Yet, he explains, it attracts a host of musicians, and anyone who lives in Kathmandu for a couple months will end up there, including legendary musician Sting, who played there once. He describes it as super cozy and that it offers great drinks, including some of the best momos, Nepali/Chinese dumplings, he’s ever had. While the bar has recently moved to a new location after the original building was torn down, he’s has heard that the new venue has really come into its own. He says the owner is also one of the drivers behind the yearly Jazzmandu festival, which generally takes place in October or November, and there’s a gig or two at the joint during the festivities.

Laos: Scott introduces Utopia in Luang Prabang, Laos as one of the all-around most well rounded bars he’s seen. 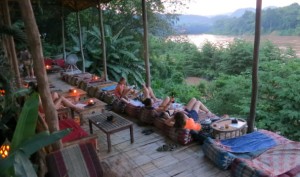 When Trevor went back a couple years later it looked exactly as Derek had envisioned it and he thinks the bar is now so cool. Totally tropical chic: literally utopia. Scott explains that the bar is laid back, groovy, and welcoming. It offers a great view of the river below from multiple decks, the beach volleyball court Trevor mentioned, pirate’s nest, morning yoga classes, pillows to lie down on, and great food. Scott says that Rob, the owner at the time of his visit, is a top guy. He ended up here two or three times in three days.

Vietnam: Trevor and Scott wrap up this episode talking about another place they both enjoy: Cafe Zoom in Ho Chi Minh City. Run by Steve, who also operates Vespa tours of the city, Zoom has a great corner side location on the fringe of the backpacker area, Bui Vien. Scott says Steve is a great source of information about the city and enjoys sitting on lawn chairs on the sidewalk in front of the bar watching the city’s motorcyles buzz by. Trevor recalls chatting with Steve who sent out for outstanding food from a nearby street restaurant.

Scott believes they could do a half dozen more episodes about their favorite bars but reminds listeners that these are long-standing favorites that visitors could easily find and enjoy checking out. Trevor agrees that many places come and go so quickly and some he would rather simply keep to himself. Scott then asks Trevor to give us his favorite of these favorites and a bit about that experience. Trevor says he’s spent more time more recently at Potato Head in Bali and enjoys it around sunset, when he can recruit a team of tourists to join him for a night of eating and drinking. Scott goes with Teepee Bar around 9:30pm, when it’s filled predominantly with locals, he can relax and enjoy an old music concert or have an easy conversation with Too.

Our Sponsor: Episode 17 is brought to you by Beervana. Beervana is a craft beer distributor, importing and distributing tasty American and other specialty beers and craft spirits from across the world.  Now distributing to well over 100 venues in Bangkok and elsewhere in Thailand, Beervana also has the Beer Me smartphone app that can give you info on beer related events, help you find a nearby location to have a craft beer, and through the craft beer club – bring you home beer delivery!