Trevor introduces the episode by talking about how, while their careers have been travel related, Scott and he still haven’t seen it all.  People often assume because of their jobs they’ve been everywhere and seen everything but the reality isn’t that simple.  Scott agrees that there are never enough hours in a day, weeks in a month, and months in a year for travel.

Scott mentions that Si Phan Don first got on his radar about eight years ago, when he asked Mason Florence, former Lonely Planet Vietnam author and publisher of Bangkok 101 Magazine, for one of his favorite up-and-coming travel spots.  Within the next couple months a number of other travel gurus such as Joe Cummings mentioned it too. Although he still hasn’t made it there, Scott has spent a good deal of time on the Mekong River in various spots and really want to experience this area, making his way south, following the river all the way to Phnom Penh.

Trevor mentions that, aside from natural beauty, another cool thing to see in the area is the Irrawaddy Dolphin.  The local population calls the dolphin ‘the fish with breasts’ and many believe them to be reincarnated humans who died in the many nearby waterfalls.  The Irrawaddy Dolphin, which he explains is the only fresh water dolphin in the world, can also be found in Cambodia and Myanmar, but they are endangered and dying off. Trevor talks a bit about his experience on the river, seeing the dolphins, and having 3G cell phone reception in a remote village across the border in neighboring Cambodia.

Trevor then reminds listeners what a big temple geek he is, so it shouldn’t be a surprise that he wants to go to this region of Laos to visit Wat Phu.  The temple is located just to the north of the 4000 islands region, just south of the town of Champasak.  Trevor cites historians and archaeologists who claim Wat Phu, the oldest of all Khmer temples, to offer the most beautiful temple setting and finds that reason enough to travel to the region.

One of Trevor’s favorite areas of Cambodia is Ratanakiri, a remote and undeveloped province bordering Laos and Vietnam in the northeastern most region of Cambodia: not far from the 4000 Islands area just discussed.  Scott offered up this selection as one of the places in Asia he would most like to visit.

Scott and Trevor talk about how large, remote, and unspoiled Virachey National Park is.  Tribal groups in the area don’t travel far from their villages and when they do they typically travel by foot on jungle paths or by boat on various waterways that crisscross the region. 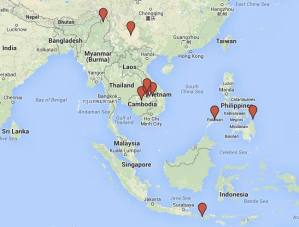 Scott talks about how park is a massive and diverse area, covering nearly 3,300 square km of montane forests, bamboo groves, upland savannah, deep valleys, and mountains as high as 1,500m.  Scott also mentions how Virachey is only one of two Cambodian ASEAN Heritage Parks

Trevor discusses how, when he was in Stung Treng where the National Park office is located, he was told by park authorities that wild elephants, tigers, clouded leopards, freshwater crocodiles, otters, tortoise, and many endangered monkey species all inhabit the park, and that it is difficult to know the exact type and number of species as the countryside that the park encompasses is vast and mostly impenetrable.

Scott and Trevor then talk about how, if you want to do a trip into Virachey National Park, your best bet is to visit the national park office in Ban Lung or Stung Treng, to arrange various multi-day treks into the wilderness, where you can visit tribal villages and spot wildlife.  They also talk about how you should not venture into the park without guides:  not only are you likely to get lost, but there are other dangers.  Sections of the Ho Chi Minh Trail passed through these parts and there are large quantities of unexploded ordnance from US bombing raids in the 1970s.

Scott finally mentions that you should also know that there are no camping facilities in the park: no bathrooms and no cabins.  Trevor says that you may sleep the first night in a tribal village on a ‘home-stay’, but will also likely spend some nights in a hammock -one covered by mosquito netting and a rain fly

When Trevor was writing the National Geographic Cambodia guidebook he read dozens of books about the ancient history of Cambodia and explored the far reaches of the country to visit most of the remote temples of the Angkor empire.  But one temple has managed to continually elude him and it is another destination that’s on both Scott’s and Trevor’s lists of must-see travel destinations.

Trevor talks about how everyone who has been to the Angkor temples near Siem Reap is familiar with Angkor Thom.  They stop at the entrance of the city to take photos on the bridge across the moat, where larger than life demons and gods flank the causeway.  Once inside Angkor Thom they visit the Bayon, the temple with dozens of faces looking out in every direction across the former kingdom of Jayavarman VII.

Trevor then explains that what most people don’t know is that Angkor Thom was one of three massive temple complexes built by Jayavarman VII and that Preah Khan is actually larger than Angkor Thom.  He explains that Jayavarman VII ultimately built up the temple into a proper city, linking it to his capital with a 75-mile (120-km) elevated road, a major thoroughfare of the ancient highway that passes by Beng Mealea 60 miles (96 km) to the East.

Trevor first planned to visit Preah Khan around six years ago when he was exploring that region with Richard from Siem Reap Dirt Bikes.  Richard was really excited to take him there as it was the middle of the monsoon season and they were going to have to drive the bikes across rice fields, through rivers, over logs spanning rivers, etc.

Most tour agencies will tell you its not possible to get there during the rainy season, but Richard seemed to think that was the most fun time to go.  They didn’t make it because Trevor had some urgent business in Siem Reap to get back to, but its been on the bucket list ever since.  Scott and Trevor are planning to do it this winter, in the dry season, when the ancient highway connecting Angkor and the Sambor Prei Kuk temples is dry and likely bumpy, but manageable. 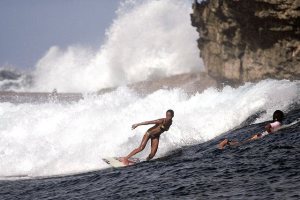 Trevor explains that he was recently planning a trip to the Philippines with some friends from Hawaii and just noticed that one of the two, Palawan, has been getting a lot of praise in recent months.  The Huffington post recently called Palawan the most beautiful island in the world and the Conde Nast Traveler’s Reader Choice Awards named it “The Top Island in the World.”  He suggests that with that kind of press it’s better to visit sooner than later, particularly while everyone is still talking about Boracay.

On the opposite side of the country, Siargao, which is located 800 kilometers southeast of Manila, has been described by bloggers as having white beaches, enchanting lagoons, caves, sand bars, coral reefs, bizarre rock formations, exotic wildlife, endless rice fields, waterfalls, and a large mangrove forest reserve.  The main reason Trevor says he wants to go to Siargao is the legendary surf break Cloud 9.  Trevor’s friends know someone living on the island who says they can also hire a boat to take them to more remote and less crowded surf breaks on the northeastern coast of the island.

While it’s getting mainstream, Scott says he’s only been to Indonesia once, that being Jogjakarta and the temples around there. He says that he would really like to experience an Indonesian beach area and Lombok seems like a smaller, more intimate choice than Bali. He also really wants to surf again and have read that some areas on the west side of the island offer good surf for beginners.  He would also really like to do a couple days hike up and down the island’s massive volcano, Gunung Rinjani, which stands at over 3,700m.

Trevor then talks about how the volcano trek takes at least a couple days and that, while he researched the island for a writing assignment that was shelved, the island itself takes some time to explore, offering surf break areas on the southeast and southwest of the island as examples.  They then discuss the contrast with neighboring Bali and the fact that the island is comparatively undeveloped and untouristed but hardly off the radar.

Scott talks about, after trekking in Nepal a few times over the years, his business partner and he got talking about trekking the Himalayas in Myanmar and Putao in particular. Putao is a small town in the northern reaches of the Kachin State – very inaccessible, by road in summer only or nationals and otherwise tourists have to fly in as part of a group tour – although this may change in the future. Visitors there will see Shan, Lisu, and Rawang people and in one area – Hta Lone who are under four-feet-tall.  Visitors can do a 10-day trek out and back to see Mt. Hkakabo Razi, Southeast Asia’s highest peak at 5,889m with a Base Camp at about 3,900m.

Trevor then talks about how he would love to travel the coast of Myanmar.  Scott talks about some of the beach areas that he’s aware of, which are now much more accessible to visitors.  Trevor talks about the thousands of islands that dot the Andaman Sea coastline of southern Myanmar: a much greater number than exist along the Thai coastline just to the south.

Talking of the islands of Myanmar reminds Trevor of the Surin Islands National Park in Thailand, which are the northernmost islands in that country.  He talks about wanting to do a “homestay” with the indigenous Mokken through Andaman Discoveries, who can set you up in a tent within the National Park and arranges activities with the Mokken, such as learning traditional spear fishing.

During his fellowship with the Asia Pacific Leadership Program at the East West Center, Trevor did a one-week study-abroad excursion to Yunnan and was very impressed by the natural and cultural charm of the region.  He offers Yunnan as a final bucket list destination as the province is quite large and features a great many destinations worthy of returning to explore.  Scott agrees that he’s dreamt of Yunnan after hearing from friends about the beauty and exotic attractions of the Chinese province bordering Thailand to the north.

See the GoogleMap from this episode

Our Sponsor: Episode 15 is brought to you by Four Rivers Floating Lodge, Cambodia – If eco-tourism conjures up visions of uncomfortable beds, leaky tents and songs round a campfire, 4 Rivers is not for you. Relax and let your senses take over, 4 Rivers Floating Lodge is at one with the natural order and engages the local community in promoting and fostering the soft tread of an environmentally aware footprint.