Trevor kicks off this episode of Talk Travel Asia, Almost Asia! Hawaii for First Time Visitors explaining that “Hawaii lies in the middle of the Pacific Ocean and, while Scott and I have pretty extensive knowledge of the area, we haven’t done an episode on the islands as they are not officially part of ‘Asia’. That said, Hawaii is not really part of the Americas either; it lies within what is considered the Asia-Pacific Region, which is apt as Hawaii has strong Asian influences, including large populations of Filipinos, Chinese, and Japanese, who, over the centuries, have contributed diverse cultural influences to the islands from food to language to clothing (read Trevor’s History of the Hawaiian Aloha Shirt). Throw in a large number of Asian visitors and you realize that Hawaii is as “Asian” as it is anything else. So, kick back, crack open a cold coconut porter and enjoy an episode about my favorite place in the world, the islands of Hawai’i.” 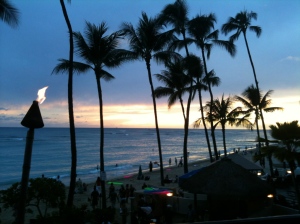 Trevor: “Growing up in Vermont, we escaped the snow for tropical islands pretty regularly, at least once a winter, and we went to Hawaii a few times as a kid and I honed my skills as a waterman there, surfing in town, bodysurfing at Sandy’s, and almost getting killed by some monster shore-break at Waimea when my sister literally climbed over me to save herself. When I was in college, my roommate Matt’s mom moved to Hawaii and my parents put a more permanent foot in Waikiki, so I flew out a bunch of times while going to school in LA. My parents have made Hawaii their home base now for around 30 years. I lived there for around 4 years before moving to Bangkok in 2001. I had a great job for a few years as a “secret shopper” for Safeway supermarkets. They paid my flight and rental car twice a month to go to Maui, Kauai, Hilo, and Kona. I had season passes to Volcanos and Haleakala National Parks and camped all over the islands. I started writing a guidebook to Hawaii which is in a shoebox somewhere at my parents place. I go back to visit my family there every year for around a month. I still get around the islands when I’m there.”

Scott: “I first went to Hawaii for the APLP – 2011 for 5 months, during that time did some exploring on Oahu, Maui, Kauai and the Big Island – Hawaii. Thought it was tourist hell before going – boy was I wrong! I was fortunate to go back in December 2016 to take my parents there for their 50th wedding anniversary. During that trip we spent time on Kauai’s north shore, the southern part of the Big Island and western Maui. A great trip. What I remember most is looking out my room at Hale Manoa at Mt. Olympia everyday. I also hiked up it a number of times and rode my bike up Mt. Tantalus. Great place and memories!”

And before we go any further, we’re looking for Patrons – sponsors to help the show keep going. You can sponsor anywhere from $1/month upwards. These funds will help us cover costs of keeping the show going. Visit PATREON TO DONATE TO THE SHOW or the link from the left-side of our website, or search Talk Travel Asia Patreon. Thanks in advance for supporting the cost and helping to keep the travel talk happening.

Scott: Before we get into thing too far, a very quick background:

It’s figured that around 1200, Tahitian explorers, navigated with purpose, using the stars to Hawaii. We’ll get more into navigating later in the episode, but it’s important to note that Polynesians traveled thousands of kilometers, in simple boats to the islands. How they knew they were there? That’s a mystery.

British explorer James Cook arrived in the Hawaiian Islands in 1778 and eventually met his fate there, being killed by locals in 1779 after greatly offending local leaders.

A powerful impact of Europeans arriving to Hawaii was the quick decline of local populations who weren’t used to foreign diseases, particularly smallpox. In the 1770s there were roughly 300,000 Hawaiian, then only 60,000 in the 1850s to 24,000 in 1920. Wow – a serious way to wipe out a local population!

The American Board of Commissioners for Foreign Missions sent the first group in 1820 with Hiram Bingham being a protestant missionary that landed with the first group. The US annexed Hawaii in 1898 with it becoming a full-fledged US state in 1959.

That of course is a very quick, broad overview. If you’re interested in more historical details, check out links in our Show Notes on the website. It’s also worth reading the very good but very long novel, Hawaii by James Michener.

What many people don’t know about Hawaii, is that it’s populated by many Asians, notably Chinese, Filipino, and Japanese migrant workers who were brought here to work sugarcane fields. The government didn’t want too many of one foreign ethnic group, so they brought various groups over time. Pineapples took off later, but today, Hawaii is made up of ethnic Hawaiians, many Asian groups and others. It’s truly a tapestry of cultures, which is also evident in the foods available.

Trevor: Just for a quick overview, the eight main islands are, from northwest to southeast,  Niʻihau, Kauaʻi, Oʻahu, Molokaʻi, Lānaʻi, Kahoʻolawe, Maui, and the Island of Hawaiʻi. Huv-ai-ee. Which brings me to a on pronunciation. I gonna speak Haole, which is the word for gringo, farang, whitey. There has been a great Hawaiian cultural renaissance over the past 50 years and more traditional linguistic pronunciation has been a part of that. That said, people in Hawaii speak a pidgin dialect that has its own pronunciation, grammar, vocabulary. When I’m in Hawaii I naturally adopt it a little bit. But for the show, I’ll stick to speaking Haole, though I occasionally do use a lot of Hawaiian and pidgin words in my everyday vocab, just cuz they’re the best words for all kine things, like da kine, which is a word for a whatever thing you want to refer to.

Check out a Google Map of things to see and do in Hawaii!

What do we love about Hawaii?

Scott: The clearest water I’ve ever seen, abundant wildlife, mountains/volcanoes straight out of the sea, diverse cuisine and culture and super friendly people. You were talking about the eight main islands – most people don’t know that the oldest, and smallest island is in the NW of the chain, with the newest, largest and still growing, Hawaii in the SE. It’s an active chain and if you look at them on a map it will immediately made sense – pretty cool!

Trevor: First, the number and diversity of attractions. A lot of visitors write off O’ahu, the island where Honolulu is located, because maybe Waikiki is a bit touristy. but Oahu is called the gathering place and it’s the most populous for more than just its central location: meter for meter, O’ahu has so many awesome beaches, hiking trails, snorkel and dive spots, not to mention attractions like the Honolulu Museum of Art, Bishop Museum, Pali lookout, Pearl Harbor, etc etc. But then over on the big island it snows and there are active volcanoes, the stargazing and camping in Maui’s Haleakala crater are unlike anything on earth, and then then there are all the snorkel sites and surf breaks, the waterfalls and rainbows, valleys and beaches of all sorts on all the islands. Beyond Honolulu, which is still a pretty cool little city, Hawaii is really clean (especially compared to elsewhere in Asia), and its relatively unspoiled from being so remote, pretty undeveloped, and generally well managed, because the people of Hawaii tend to respect the land nowadays. Malama a’ina. Collectively, the islands of Hawaii pretty much offer anything for anyone who isn’t just looking for New York City or Bangkok-level nightlife.

Alright, lets talk about the major islands, what we enjoy about them, and how you should approach a holiday, as it’s pretty far away for most people.

O’ahu: The Gathering Place, where the capital city of Honolulu is found.

Scott: I really enjoyed the town of Paia – Willie Nelson, Kiss and others have restaurants and bars here. Ho’okipa Beach Park is a great spot to watch surfing as well. One of the great things about Hawaii is that all beaches are public so you can access any beach, even if there’s a hotel or resort there.Kihei and Lahaina are were most tourists tend to stay.

Trevor: hiking and camping in Haleakala,  snorkeling at Honolua Bay, the road to Hana but only if you stay in a cottage at waianapanapa state park or one of the cool hippie boutique hotels i hear have popped up in recent years.

Scott: My favorite Hawaiian island – really incredible. Not too big, but the canyon is incredible, Na Pali Coast – wow. I really enjoyed staying at Princeville but check about rain when you visit as it really pours there during certain times of year.

Scott: This is a big island – keep that in mind when driving around. The east coast is very wet, with Hilo being one of the wettest cities out there. Volcano National Park is great – really well organized and accessible for everyone. I’d love to do a multi-day hike up to Mauna Loa. The snorkeling at Napo’opo’o Park was really great too. I regret not doing a scuba dive with rays.

Check out a Google Map of thing to see and do in Hawaii!

Trevor talks about his experience and knowledge of Moloka’i and Lana’i. I’ll share a link to a story I wrote about our trip to Lana’i on the shownotes.

Scott: It’s pretty quick and easy to fly island-to-island, with flights taking 30-60 min and costing about US$80/way. Don’t try to pack too much in though. It’s better to spend more time in a location than go everywhere and see nothing. That said, in two weeks you could visit three islands. Car rental is essential but expensive, costing as much as US$100/day.

Trevor: Try the Turo app/website that lets you rent other people’s cars. I have some friends who owns cars just for renting to visitors. you can pick up and drop off at hnl airport. on oahu, the bus. in waikiki the biki bikes.

Safety: Water safety: If in doubt, don’t go out. Never leave things in rental cars. Best to leave nothing inside and don’t lock it.