After being asked a ton of small questions over the years by new travelers to the region, today we’re taking a step back for this episode, to share some of the base-level knowledge we’ve acquired via our three decades of collective travel in the region. Some items will be obvious to some, others not so much so, but we’ve had some fun thinking of little ins’ and outs’ of traveling in the region that we think are worth sharing. From navigating red tape to railroads, we’re set to tackle getting in and around Southeast Asia. Pour yourself a drink, sit back, and enjoy! 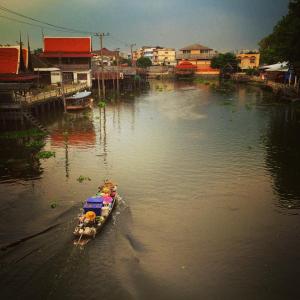 Life along a Bangkok canal

This is by no means a comprehensive list, but people email us questions all the time about the most random stuff. One of our listeners, Daniel just asked about an upcoming trip he and his wife are planning in Thailand and Cambodia. We think everyone has random preconceived notions, gaps in their knowledge, or are just unsure about having never traveled in the region.  So we’ve decided to just blast out an array of knowledge on various subjects some of which might be more useful to you than other things.

Depends on your nationality: whether visa waivers (free 15, 30 or 60 days), including now Thailand and Indonesia for most countries, and visa on arrival in Cambodia and Laos for pretty much everyone and Vietnam for everyone but Americans it seems, or visas that you have to apply in advance for, including Myanmar China. Even Myanmar now has visa on arrival and apparently e-visa. Cambodia has a great online e-visa system as well..

Word of caution: situations and policies change often, so read up before you go – do not take our word as being definitive – some little spat happens between nations, or a general changes and visa rules change too. But, the point is, it’s getting easier and easier to travel the region, visa-wise.

It seems the shadiest people in every country hang out at the airport and have some sort of scam to flog.

In Southeast Asia when you get off a bus or a train, it’s a lot more difficult to figure out what to do next than after you get off a plane. Unless that plane lands in a smaller city, which is another story (one with far fewer options), usually you’ll be accosted by dozens of guys trying to get you to take his tuk tuk, taxi, or pickup truck to take you to his favorite guesthouse. The crush of touts can be unbelievable. I like to ignore them, walk a block away and look around for someone with a little less intensity.

Scott says: I always like to find a spot to sit down and have a Coke/coffee/drink, let the dust settle for 15min after arrival and then catch a ride. UNLESS: you are in a very small town where the only ride is the truck that there is there at that time and there won’t be another one for a long time.

Trevor says: Some ground transport: minivans and open-air or covered pickup trucks in countries like Laos or Cambodia and/or Indonesia, don’t leave until they’re full. And it takes however long it takes to get there. Your best bet if you’re going to or from more remote areas is to put your watch away and enjoy the ride. You’re going to get there when you get there and the journey is part of your adventure so just try to enjoy it.

While this is SE Asia and the unexpected is part of the fun, it’s also worth considering a few safety points to keep in mind while on the road:

Try to avoid taking ferries or busses at night. Busses because there are a lot of drunk drivers even on remote roads and truck and bus drivers often take amphetamines to stay awake. If you’re taking a bus, spend the extra for a bus that has two bus drivers so they take shifts when driving to keep things safer.

Thailand particularly has the most dangerous roads in the world (after Libya). Holiday weekends in particular, don’t take busses at night. Some companies even have guys rifling through bags in the undercarriage while you’re sleeping up top, so don’t keep valuables in your bag.

When taking a boat to an island, have a look at them, as they are often literally overloaded with supplies for the island and are therefore more likely to sink on the way out. Don’t be on the sinking boat at night. You’re much more likely to survive by day. And have a look at where the life jackets are so you know in case you suddenly need one.

Links to some things we discussed in the episode: