Episode 35: Inside Bangkok – The Nana Neighborhood 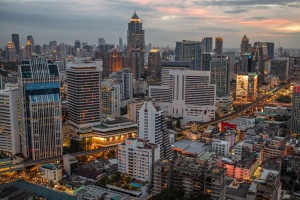 Few areas in Bangkok are as colorful, multi-ethnic, busy, and diverse as the Nana area. Situated on Sukhumvit Road, roughly between Sois 1-15, almost everything can be found here within a few square kilometers. Traditional Thai massage: check; Arab food: check; cheesy souvenirs: check; go-go bars: check; you get the idea – there’s a little bit of everything and then some in this frenetic and fun district. On this episode we’ll dive into everything that is Bangkok’s Nana area and then some.

When Trevor first moved to Bangkok in 2001 he lived in the Nana area and he remembers his first night he had to go out and find a pharmacy because he needed tooth paste and he walked over to Nana (Sukhumivit soi 3 from his apartment on soi 1) and the first thing he was shocked by was the lack of Thai people: it seemed that every one was from the Middle East or Africa. While this was certainly culture shock at first, he soon realized the numerous benefits of this colorful, international, Bangkok neighborhood: the food, the street market, the Marriott, and of course the red light district, where one of his first neighborhood hangouts was located: Woodstock.

Scott then talks about what the area seemed like during his first couple years in the city, his first experiences there, etc. Trevor then talks about the other thing that he had in the neighborhood was two of the coolest clubs in Bangkok: Bed Supperclub and Q-bar. Little did he know at the time that Nana, soi 11 in particular, was poised to become one of the hottest bar and club districts of the 21st century. Scott then talks about a few of the old classics hang-outs in the area: Cheap Charlies and Check inn 99.

Scott talks about the name of the area, as it’s quite an interesting story for a predominantly Buddhist country. The area is named after ‘Lek Nana’, a Thai businessman and politician of Muslim of Gujarati ancestry and senior member of the Central Islamic Committee of Thailand. He is one of the founders of the country’s Democrat Party and served in several government ministerial posts during his life. He owned much of the land on Sukhumvit Soi 4 and the area adopted his name. Today many of the business owners are family of family of his, and if you visit the area you’ll notice many of them are also of Sikh heritage.

Scott and Trevor then discuss the different features of the neighborhood by category: 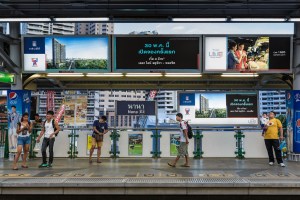 Nana has to be the most multicultural few blocks of space in the entire country. You have a lot of Sikhs who are business owners as mentioned before, then also a lot of people from various Middle Eastern countries who own and run businesses on Soi 1-5. They likely got land here due to Nana being Muslim back in the day. There are also Africans on Soi 1-5, then a mish-mash of Nepalis selling souvenirs along the street, tourists from all over the world eating, drinking, and buying stuff. There must be at least 50 nationalities at all times in the area. It’s quite diverse both in respect to tourists and the wide range of people working here.

Tailor shops: Make sure you have enough time to get a proper suit made, including three fittings for a proper suit; that you should know that you get what you pay for, so don’t rush the process – Scott says that Raja’s is pretty good as is Rajawongse Tailor.

Souvenirs: At night the Nana area is a huge street market, selling street-side t-shirts, Buddhist statues, sex toys, and more, mostly on the odd-number side of the road, between Soi 1-15. Bargain with a smile!

Prescription drugs and generic brand pills: the whole neighborhood has lots though Scott and Trevor recently bumped into each other at the big Chinese pharmacy next to the Marriott, between sois 2 and 4.

Ladies of the Night 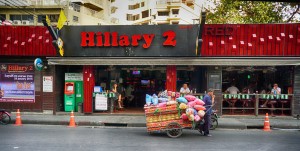 Scott and Trevor talk a bit about how this industry works in Thailand: freelance bars, regular bars with freelance girls hanging out, BJ bars, full-on ladyboy bars, and everything in between.

Freelance bars are worth a look for some insight on that life (make sure you have a beer and are nice): Gulliver’s on Soi 5 is good, Hillary 1 or 2 on Soi 4, Beer Garden bar on Soi 7 is odd.

Sitting at Big Dog’s at the corner of the entrance to Nana Plaza is a great place to people watch.

Nana Plaza is one of three main go-go bar areas in the city. It’s three floors of bars of various quality, some offering shows (Angel Witch), an abundance of ladyboy bars, and everything in between. Be nice, buy drinks if you are chatting with them, smile and have fun. Nana Plaza didn’t become a go-go bar area until the early 1990s. In the late 70s it was a shopping plaza, then gradually morphed into a restaurant/bar area, then finally into the go-go bar area it is today.

There are tons of choices in this area, but a few we really like in various categories include: Ariyasom Villa, Ad lib, JW Marriott, On Eight, Aloft, Suk 11 Hostel, Salil, and Dream hotels.

See a map of the spots we talked about on this episode!

Links to some things we discussed in the episode:

Our Sponsor:Greg’s Bangkok is an iPhone app that takes you on GPS-guided walking tours of some of Bangkok’s most interesting, dynamic, and strange neighborhoods. As you walk, audio commentary gives you the inside scoop on the places, stories, and hidden details of the area you’re in. Best of all, there are no dodgy tuk-tuk’s to deal with, no taxi drivers to refuse your fare, and no schedule to stick to.

0 comments on “Episode 35: Inside Bangkok – The Nana Neighborhood”