Episode 30: Up and Coming Cambodia with Nick Ray 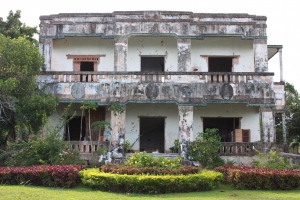 Cambodia is an amazing country: truly one of Asia’s top destinations. From the incredible testaments to human achievement that are the temples of Angkor and the vibrant capital Phnom Penh to the sleepy seaside town of Kep, the charming riverside town of Kampot, emerging beach destinations in the southwest, hill tribe communities in the northeast, and the fascinating floating villages on the immense Tonle Sap lake, Cambodia’s got it all.

That said, most people only visit the temples of Angkor and maybe devote a few more days to one other area. Yet, Cambodia is a country that’s changing quickly and has so much more to offer visitors if they devote a bit more time to the destination and dig a bit deeper.

Trevor talks about an area that’s not so well known: Rattanakiri province and its volcanic crater lakes, great dirt biking, and exotic hill tribes. Rattanakiri is much more accessible nowadays with the new road connecting Stung Treng (near the border with Laos) to Siem Reap (where the Angkor temples are located), but most people still don’t head out that way.  Mondolkiri is one of the best unappreciated areas too: even more remote and offering a totally different landscape from the rest of Cambodia. 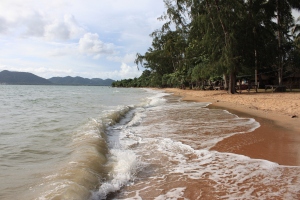 Scott has been to Cambodia about 15 times, but hasn’t gotten that far off the beaten path yet. That said, he has been lucky enough to visit Kep, Kampot, Souhanikville, Song Saa, 4 Rivers, and a few other spots. A real highlight for him outside of Siem Reap and Phnom Penh was spending some time at Song Saa, setting foot on Ko Rong, and enjoying a few incredible days along the Tatai River near the Thai border. Despite going there a number of times, there’s a ton more he wants to see. High on that list is Preah Khan temple in the center of the country and Rattanakiri province in the far northeast.

Scott then explains that, today, they are going to talk to longtime Cambodia resident and Lonely Planet author Nick Ray about Cambodia’s up and coming hotspots. He knows as much about the country as any foreigner, has traveled most of its far corners, and is going to share some of his favorite, not-so-well known spots that he recommends hitting before the word gets out.

Where are you originally from?

When and why did you come to Cambodia?

How did you end up writing for Lonely Planet?

What do you love so much about living and working in the country?

Outside of the capital Phnom Penh, and the Siem Reap area/temples of Angkor, what else does Cambodia have to offer?

What are some of your favorite not so well known spots to visit?

What’s required to put some of these spots on the map?

What’s your favorite spot for a mountain escape?

What’s something you think people don’t know about Cambodia and its people?

See a Photo Gallery of pictures from this episode! (soon)

Check out a Google Map of Up and Coming Cambodia! (soon)

About our guest: Nick Ray

3 comments on “Episode 30: Up and Coming Cambodia with Nick Ray”