Before getting to their guests, Scott and Trevor talk a bit about how and when travel became a part of their professional lives, including a few of the challenges of taking that initial plunge, as well as some of the joys of living a traveling lifestyle as a full time profession. They then talk about travel with a significant other as their guests are both professional travelers and a pair of traveling companions.

Scott talks about how and when he first met today’s guests, on a Smiling Albino trip that was co-sponsored by the Tourism Authority of Thailand, and then introduces Dave & Deb, world travelers and founders of The Planet D.

After talking  about their background, Dave and Deb tell everyone about how long they have been traveling professionally and what was the impetus for actually deciding to make travel their livelihood. After kicking around different travel-related business ideas, they decided to try to create a TV series while doing the Tour d’Afrique bike tour and then took it from there.

Deb and Dave then discuss the biggest adjustments from a ‘normal’ life to this sort of travel/self-promoting lifestyle, when they noticed certain challenges, and how they overcome them. Dave explains that the biggest adjustment was getting used to being in a different place all the time, year after year. At first it was difficult, he explained, particularly while running a business. Deb explains that their current goal is to find a balance between the work of travel and the fun of travel, which is why they initially got into it. 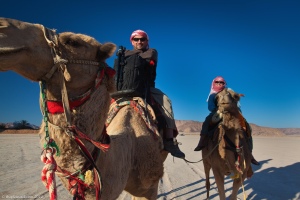 Scott asks about where they call ‘home’ and they reply that they no longer have a residence, staying with Deb’s parents whenever they need to return to Canada. They then talk about selling off all their stuff on a quest to be devoid of possessions. Scott asks how it feels to now be free of the things that most people work towards having. Dave replies that it was so liberating, and Deb says she doesn’t miss anything, in stark contrast to wanting so many things when she was younger – though she concedes they have lots of electronics, cameras and such, which they need for work.

On the business side again, Scott asks at what point they realized they needed sponsors for The Planet D in order to take their traveling lifestyle to the next level. Dave and Deb talk about the steps in the first few years; how they found the right business model and focused on creating a brand, creating an online ‘celebrity’ presence that could work as a business.

Finding a bed in Antarctica

Scott comes back to sponsors and mentions Expedia and American Express as some of The Planet D’s financial supporters. Deb explains that the plan all along was to get funding via ‘sponsorships’ – they wanted to be brand ambassadors for travel. For brands that they believe in, Dave chips in. As they told their story and built their own brand, sponsors came to them, Deb explains.

Scott wants to know about how, during the development of The Planet D, Deb and Dave made use of a publicist. Dave replies that it was an expensive, but very worthwhile step to raise their profile and get a foothold to market their brand. Scott follows up by asking at what point were they actually able to make a full time living traveling and documenting their journey via The Planet D. Deb explains it was a good two years and that it helped to have some savings and a good plan. She warns that fresh-out-of-college travel bloggers would have had difficulty doing what they were able to do because of their savings. Dave says it was two years before they even started to make money, and then it was just enough to sustain them for a month at a time.

According to their website, it was a five-week trip to Thailand that saved their marriage, and Scott asks what it was about that trip that put the spark back in their marriage.

See a photo gallery from this episode.

About Dave and Deb: