Scott starts the episode talking about how paddling is something that he has always enjoyed doing when at a beach where there are kayaks for rent. Typically he’s only ridden on simple sit-on-top varieties and usually has only done so for an hour or so. He enjoys it because it’s very inexpensive –typically about $5US/hr in Thailand, it’s good exercise, and it gets you up close and personal with the area.

Trevor’s experiences are somewhat similar: he’ll rent a kayak for exploring islands or coasts when he thinks there might be beaches that are impossible to get to by land. Kayaks are also good for getting to nearby offshore islands, such as the Mokulua Islands off Lanikai in Hawaii. He has done some day trips around Thailand with some tour operators, including trips to Mu Ang Thong Marine Park near Koh Samui but he’s never done a overnight or multi-day kayak excursion to paddle and then camp and then paddle again. He would love to do something like that along the Na Pali coast on Kauai or Abel Tasman in New Zealand.

The longest trip Scott has ever done was out to Koh Kai (Chicken Island) off Ao Nang, Krabi, which took about an hour and a half or so, but he got sunstroke. The most common paddle he has enjoyed is off the far end of Ao Nang Beach, out to a towering island, along the cliffs, for a glimpse of Railay Bay. This paddle takes about an hour and is great to do at sunset. He has also paddled many times on the Mekong River for a couple hours around the Chiang Khong area just south of the Golden Triangle and did a couple hours down the Tatai River when staying at 4 Rivers Floating Lodge in Cambodia.

Ian paddling and being a bit camera shy

Scott first met Ian Taylor a couple of years ago in Bangkok, where he lives a good portion of the year. They share a common professor, along with Trevor, and that was a reason for them to meet up. Ian’s best known as a professional photographer but he’s also an accomplished paddler. He’s kayaked Thailand’s southwest coast from Myanmar to Malaysia and he is going to share that journey with us today, Scott explains.

After greeting the hosts, Ian tells us that he’s currently in Bangkok but that he’s typically a migratory/nomadic photographer. He explains that he’s in Bangkok around four or five months a year. Scott asks Ian when he first came to Asia to live and what has he been doing since that time. Ian explains that he used to be in the film industry and first came to Thailand to study Thai. He went to Phnom Penh from 1994 to 2000 to work with a trading company, and ended up as the business manager of the Cambodia Daily newspaper. During a stint in advertising in Cambodia, Ian got to travel around the region a bit more and consequently got serious about photography.

When asked when he first got into kayaking, Ian replies that he was on a live-aboard in the Mergui Archipelago, Myanmar and had a great time paddling there. One of his guides had done some longer adventures and Ian was convinced to buy a kayak himself. He and his friend Tim decided that they should buy folding kayaks and that was what really got him into doing longer paddling trips.

On the open water

Ian explains that this was all around 2007 and that they decided to go with the folding kayaks because they are easier to get to a destination prior to a paddling adventure. He says they’re more expensive and take a bit more maintenance, but they allow him to paddle anywhere, regardless of the logistics of getting to the coast. He then talks a bit about the price of the kayaks, as well as the paddles, and the camping gear, all of which are essential for longer voyages.

Ian then talks a bit about packing, a challenging endeavor for month-long trips. Trevor asks about the need for camping skills as well as paddling skills when heading out on such adventures. Ian explains that his paddling partner Tim, who is often based on Koh Payam, is the man in regards to paddling and camping, which is essential because he isn’t as skilled and could never go it alone.

In fact, the idea for paddling along the southwest coast came up on Koh Phayam where the two pondered the idea of paddling all the way down to Malaysia. One of the big challenges they discovered on their first attempt was food, and Ian got sick around 250km along the way and had to pull out of the expedition in Krabi. The following year they went to Philippines and therefore didn’t successfully make it from Koh Phayam to Koh Tarutao until the year after that.

Trevor then suggests that the route along the Thai coast has enough touristy places to stop along the way to reduce some of the challenges, but Ian says the food issue is still a bit tricky. He dehydrates everything, including a huge vat of pasta sauce that he prepares in Canada weeks prior to the trip. He explains that fishing is quite difficult and that they now have their ‘go to’ places along the coast to get some home-cooked meals but that dehydrated food is really the most important aspect of eating on such adventures.

Scott then asks about the route. Ian says it’s about 25 days paddling: 560km pushing pretty hard –around 30km per day. They follow the Ranong coast, a pristine coastline that includes Koh Ra; then go past Koh Phra Thong, where there is an intricate mangrove system; past Koh Ko Khao and Khao Lak; straight down past Phuket, turning left under the Phuket bridge; and then across Phang Nga Bay. They stop for a few days in Krabi to stock up on pasta and then head straight south, between the two Lanta islands, hugging the coast of Trang and Satun, terminating their adventure in different areas depending on the weather.

Scott asks about three major natural factors to consider on such a trip: tide, swell and wind, and Ian talks about how each affects the open water paddling experience, explaining how the three major legs of the trip roughly tie into these forces – Ranong to the Phuket Channel (swell), Phuket Channel to Koh Siboya (wind), and Siboya to Koh Tarutao (tide) – and the challenges involved in each.

Scott asks Ian if he ever paddles at night to take advantage of tides, but Ian says they’re not so hard core. He explains that they prefer to set up camp and eat before dark, only pushing it an extra hour or so when conditions are right.

Trevor asks Ian about the reactions of local people when he shows up on a kayak. Ian explains that most people he encounters are Muslim fisherman, who, as waterman themselves, are a bit surprised but pretty much always delighted to meet him and check out his boat.

Scott inquires about drinking water, which Ian jokingly calls ‘kayak fuel’. Ian says some National Parks along the way have water sources to fill up their dromedary bags as they go through about six liters a day between the two paddlers. He explains it isn’t too difficult to procure, especially with many villages along the way as well.

Tim paddling in a squall

Trevor brings up photography, as that’s Ian’s trade, but Ian says after playing around with shooting on his first trip, he realized that the only good times to shoot (light-wise) are the times of day when he needs to focus on paddling. He thinks the coolest stuff to photograph along the way are the villages he stops in but that such a project (to shoot it right) would require more time in each village, which isn’t typically part of the paddling plan.

Scott wants to know about how others might get into attempting such voyages themselves, and Ian replies that it’s a bit tricky. He thinks the Ranong coast is the most beautiful but it’s too challenging for beginners. He thinks Phang Nga Bay is the best area for beginners but doesn’t have a lot of places to stay. There are National Park campsites but there aren’t really maps for people to find out where to camp. He says Tim and he are pretty much the only ones camping on these remote islands.

He therefore suggests paddling around the bay on day trips until you get a lay of the ‘land,’ so to speak. Another option, he says, is to go to the Deep South and, with some experience, check out Tarutao National Park, where you could paddle around for a week without too much challenge. 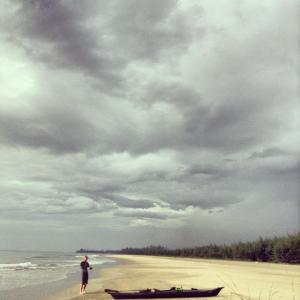 Taking a break on land

Finally, Ian explains that his next big paddle trip is likely to be in the Philippines, which he calls a paddling paradise as there are so many more islands there than there are in Thailand. Ian thinks the people in Thailand are so friendly and the coasts are so beautiful, however, that he still has lots of Thailand, as well as the east coast of Malaysia, that he would love to explore.

Check out a Google Map of Thailand’s Southwest Coast!

About our guest: Ian Taylor

Our Sponsor: Episode 20 is brought to you by Four Rivers Floating Lodge, Cambodia – If eco-tourism conjures up visions of uncomfortable beds, leaky tents and songs round a campfire, 4 Rivers is not for you. Relax and let your senses take over, 4 Rivers Floating Lodge is at one with the natural order and engages the local community in promoting and fostering the soft tread of an environmentally aware footprint.