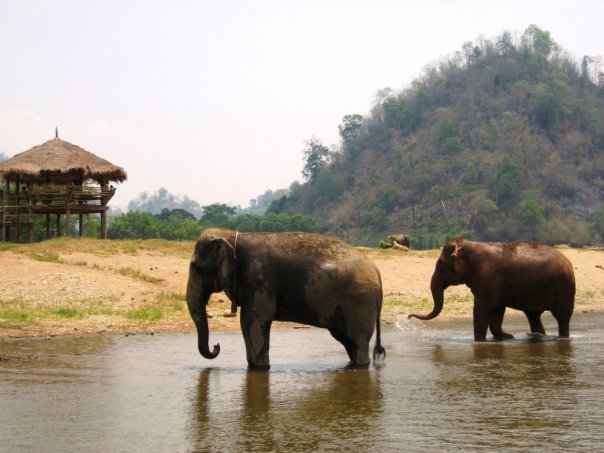 First off, this is not a podcast about attractions and activities your dog or cat could enjoy while he or she is on holiday in Asia. While that would be fun, this is about how you can experience animals as a tourist in Asia. Some are good, some are bad, but all can be contentious as animal rights are something we care passionately about but are not always taken as seriously in Asia as they are in certain countries with more strict enforcement.

You may also take note that we skipped from Episode 64 to 66 without releasing an Episode 65. Just as the streets of Thailand are numbered with even and odd sois on opposite sides that do not always line up, our episodes seem destined for incongruity, as our even numbers (with Scott and Trevor) and our odd numbers (featuring a guest) are sometimes hard to schedule in the order they are planned for release. So, from here on out, we’ll stick to such a system of even/odd numbering that aren’t always released strictly chronologically. Hope you understand!

Scott: Animals have been a mainstay of tourism in Asia for decades. Many travelers make seeing or interacting with Asia’s wildlife a cornerstone of their trip. Whether it’s snorkeling and scuba diving to see underwater life, marveling at orangutans swinging in their natural environments, volunteering to assist gibbon apes, posing for photos with tigers, or riding an elephant, Asia has a wide market of animal options available. Some are good, some bad, and others lie in a grey area. Today we’re going to talk about some animal sites and attractions we’re familiar with and others that are noteworthy.

Trevor: The animal attractions have always been a slippery slope. On the one hand, they’re clearly important attractions and typically important aspects of a nation’s culture or natural identity (just think of the Elephant in Thailand) but then there are so many problems associated with tourism and animals (Think of the Tiger Temple in Thailand). We should really have a guest on about this sometime. My classmate from EWC APLP Nabin works for Wildlife Conservation Nepal (WCN).

Elephants – Scott: Elephant tourism in general – the big shift from riding on elephants to that being completely bad and now the trend is spending time with animals, learning to be a mahout, bathing them, feeding them, walking with them. Not sure it means they are being treated better, but it’s the trend now. Overall, there are so many captive elephants and they eat a ton of food, there needs to be a way to care for them:

Trevor: Up in Mondulkiri, Cambodia, Jack Highwood runs the Elephant Valley Project, an Elephant Sanctuary since 2006 with the motto “Let Them Roam Free” – If you want to have a discussion about whether it’s OK to ride or bathe elephants or what’s the best way to deal with elephants, I suggest having a look at their website first, which has lots of great information, including some warning videos.

Ultimately, my opinion has always been to leave wild animals be. Elephants can be pretty cool. I’ve floated down a river on one at the Anantara Golden Triangle. But it’s important to remember that, for the most part, these are wild animals. And beside the danger factor, they deserve respect.

Soi Dog Foundation – Scott: Their mission is to improve the welfare of dogs and cats in Asia, resulting in better lives for both the animal and human communities, to create a society without homeless animals, and to ultimately end animal cruelty. They’ve been operating in Thailand for more than a decade and it’s a pretty neat place to visit if you’re in Phuket. You can volunteer long term or drop in for a visit at designated times.

Trevor: I think John and Kathleen, who we hope to have on soon about travel to Iran did some veterinarian volunteer work with soi dog rescue. This is an interesting one for people looking for volunteer opportunities i think.

This is a typical story in a country that didn’t have a great recent history with animal protection until the 21st century, when there has been a concerted effort by various organizations in Cambodia to preserve their wildlife. At Phnom Tamao Wildlife Rescue Center (PTWRC), Wildlife Alliance cares for and rehabilitates animals rescued from the illegal wildlife trade. With a booking, visitors to the center, just 25km south of Phnom Penh, can meet animals rescued from the illegal wildlife trade.

Unlike a zoo however, many animals at Phnom Tamao and associated Wildlife Release Station in the Cardamom Mountains are re-released into the wild. Donations to sponsor animals helps otters, leopards, loris, pangolins, and other exotic animals kept in captivity learn to survive once again in the wild.

At the Wildlife Release Station they even have visitors’ lodging and guests can Help with preparation and feeding of resident sun bears, monkeys, birds and newly released animals as well as help keepers track radio-collared wildlife and set up and check camera traps.

Sticking in Cambodia: For those into birding: Sam Veasna Center for Wildlife Conservation offers 1 to 21 day custom birding and wildlife tours with Cambodia’s most expert and specialist guides. They do a vulture feeding around once a month… For birds on the Tonle Sap lake, I recommend Osmose Ecotours who offer visits to waterbird colonies on the lake and within flooded forests.

Highland Farm  – Scott: Started by Bill and Pharanee Deters in 1991, they bought one small gibbon from a hilltribe person and never guessed what their life would become. They quickly learned about the plight of these apes, how they are stolen from the jungles and started taking injured and abused animals in. Today they have over 60 gibbons and a host of other apes, monkeys and animals. They are good friends of mine and it’s a place I’m really passionate about. You can drop-in or spend a few days or volunteer for many weeks.

Trevor:  Sumatra Orangutan Conservation Programme (SOCP) is located just outside of Bukit Lawang, a small village around 90 kilometers northwest of Medan, the capital city of North Sumatra, Indonesia. I went in 1996 and met the rangers at the center who teach previously captive orangutans all the necessary skills to survive in the wild. The orangutans are then released back into the jungle.

Semenggoh Nature Reserve – Scott: Great place, under an hour from Kuching, Malaysia on the Borneo part of Malaysia. I went here in 2015.

Elsewhere in Indonesia… Trevor: One really cool conservation effort that I love is my friend Paul’s project, Bali Sharks. Bali Sharks is a conservation nursery offering an alternative to young sharks being killed for food. Basically it’s a floating enclosure off of Serangan Island. It’s in the ocean so its not removing the sharks from the sea like an aquarium would. Here the sharks are raised until they are large enough not to be caught by small fisherman and then are released at the Gili Islands, where they are protected from fishing. The eco-tour is ocean friendly for all ages & experience levels. Even non-swimmers can enjoy feeding & up close encounters! I brought a friend out there and we “fished” for sharks… The tour also visits the Turtle Conservation and Education Center on Serangan Island, which is worth a visit even if you’re not going to Shark Island.

Scott: speaking of turtles, the Mai Khao Marine Turtle Foundation (MKMTF) was set up by the Minor Hotel Group (the parent company of Anantara) in 2002 to help rejuvenate the turtle population in the Thai seaside resort town of Phuket. Mai Khao is one of the few Phuket beaches that continue to welcome nesting turtles. The eggs are rescued from surrounding beaches where the necessary natural and peaceful environment can no longer be guaranteed. The eggs are given to the Phuket Marine Biological Centre (PMBC) and Royal Thai Navy who provide a safe home for the eggs to hatch and the young turtles to gain strength before finding their true home in the sea – the foundation funds these programs. We haven’t been here before but this program is guided by our friend John Roberts who was our guest way back on Episode 4: The Plight of Asia’s Elephants.

Tiger Temples – Scott: The most notorious Tiger Temple, Wat Pha Luang Ta Bua Yanasampanno, was a Theravada Buddhist temple in the Sai Yok District of Thailand’s Kanchanaburi Province in the west of the country.

Trevor: Here’s a good example of the slippery slope. I met the monk who ran the tiger temple up in Kanchanaburi. Perhaps he started out meaning well. But once you start relying on the tourist dollars to propagate an economic system, I think it’s easy to start thinking of the animals as an attraction rather than simply using tourists as an economic means to help the animals.

Generally speaking, the greater the hand’s on interaction with the animals the more wary you should be. Certainly there are some seemingly beneficial places, like several elephant center’s we discussed earlier in the episode, where the interaction seems benevolent. But these are the exception: most are generally exploitive.That said, it’s difficult to have zero exploitation, especially when you are trying to create education and awareness.

I saw a dugong in southern Thailand a couple years ago, but right after I got out of the water, which was a shame.  I’ve been with giant mantas off Nusa Penida, Indo. Still hope to dive with whale sharks, which are here and there around Asia. I’d bet Myanmar is a good place to look.

You can see monkey’s everywhere in Asia. Just be careful to keep your distance. Ubud Monkey Forest is actually a great place to get the fear of monkeys. If you weren’t already scared of them, you will be. One species that would be cool to see is Japanese snow monkeys. In the hot springs in Nagano!

SCOTT: Love the hawks and eagles in Nepal – soaring on thermals that rise along mountain-edges. That’s pretty sweet. I’ve heard the wild elephant viewing at Kui Buri National Park, south of Hua Hin, Thailand is quite good. Stand on platforms and view them. Run by the national park service. There are two times per day you can join I believe and it’s only something like 270B to ride in a truck for a couple hours to try and see them. Wild elephant walking along road near park.

Monitor lizards in Lumpini – one on path while jogging. They removed more than 400 lizards in early 2017 due to stated overpopulation but I still see them. Want to go to Komodo and Flores and the the Komodo Dragons – area around there looks incredible.