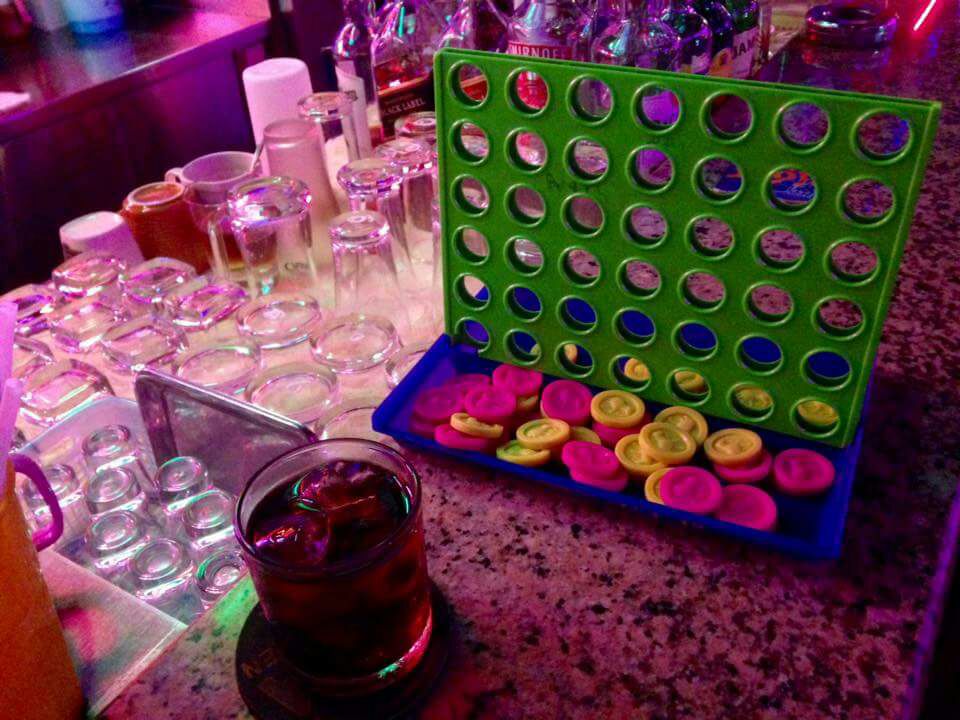 A game cafe trend took off in Asia a few years back that included both board game cafes and beer pong tournaments, and it doesn’t seem to be dying down. Today, there are a wealth of opportunities to get your game on both in and out of bars across the region. In fact Scott and I recently organized and competed in the first Bangkok Bar Games Olympics. Today we are going to talk about a variety of places to play different games across Asia, everything from family fun to just get drunk.

Our first bar game olympics was a bit impromptu, but we found that it was quite easy to arrange. Scott, his wife Erica, Trevor, his girlfriend Banksy, Eric Baker, and David Long joined in for a number of events in the Nana area. We started at Bully’s pub, where we played a pool competition (won on the last shot by Trevor and Banksy) followed by a game of darts (also won on down-to-the wire clutch shots by Banksy and Trevor).

We then moved over to Nana Plaza where Scott and Erika crushed all competitors, Scott going undefeated (though he didn’t get to test his skills against some of the resident experts, who shook their heads watching us play). Finally we moved onto Margarita Storm, where the we played shuffleboard, foosball, and video games, but no winners were proclaimed as the participants were too drunk to keep score.

Inspired by this crude first attempt, we decided to try again soon and, while discussing the possibilities, agreed there was enough opportunities around the region that it could be a great podcast episode! Here are some options we came up with for planning the 2nd Bar Game Olympics that you can use to create your own event across the region.

Pubs & Pool Halls: Roadhouse BBQ, in Bangkok is a one-stop shop for hosting an entire bar olympics: shuffleboard, darts, foosball, Golden Tee golf video game, and pool table all located on the top floor of the bar. There are lots of great pool halls in the region, especially in Bangkok. Trevor’s current favorite is The Sportsman on Sukhumvit 13, which also has a dart board and a Golden Tee machine. If you want darts, pool table, or even a pub quiz, there’s a Irish or English Pub in just about every city in Asia.

Game Cafes and Bars: These are likely found in just about every major city across the region nowadays. In Bangkok, the Battlefield Bangkok is game-geek HQ. For more sophisticated players, both kids and adults, Bangkok’s Game Over has just about every game you can imagine, both analog and digital, from old-school games like Operation and Battleship to new ones like Catan, as well as Play Stations with plasma TVs and craft beer.

Video Games: For the best video games, Japan wins hands down. Trevor played a game where you had to walk a dog. There are games where you have to type. Some just don’t make sense. And of course there there is Pachinko, a type of mechanical game originating in Japan that is used as both a form of recreational arcade game and much more frequently as a gambling device, filling a Japanese gambling niche comparable to that of the slot machine in Western gaming.

For our bar game olympics we went to Margarita Storm on Sukhumvit 13. They have a machine that has 50 different classic video games and it’s free to play! We played Frogger, Dig Dug, Galaga, Ms Pacman, and Donkey Kong.

Ping Pong: In Jakarta there is a bar called Pong Me Lounge with both standard table tennis tables and  beer pong. They also have two electronic darts machines. Likewise, in Seoul Korea’s Itewon, there is a place called The Ping Pong Pub.

Here in Bangkok there is a regular ping pong table at Beer Belly in Thong Lor Courtyard 72. For Beer Pong, there are monthly tournaments at nearby Sway and the Mad Monkey in Cambodia’s Phnom Penh, Kampot, and Siem Reap host a lot of competitions; they even have rules posted on their website.

Speaking of Ping Pong… We hit up Bangkok’s red-light Nana Plaza for our bar game olympics. We played connect four and some dice game. (some bars have mechanical bulls too). In Patong Beach, Phuket on Bangla Road (aka Walking Street) there is a game where you have to hammer a nail into a log in only two swings. Can’t think of a safer bar game for drunk tourists.

Casino Games: The biggest gaming city in the world is now Macau, where most casinos can be found on the Cotai Strip, anchored by The Venetian hotel, the world’s largest casino. As there are many Chinese players, there are some interesting Chinese games, such as guessing how many beans are scooped into a cup. In Singapore, head to the Marina Bay Sands, where there’s a crap table in there somewhere. In the Cambodian border regions, especially Poipet there are some dodgy casinos where you can even play the card game War!

Family Fun: Escape Room-style games, where participants have to figure out how to solve a mystery, moving from room to room in order to escape from the game in time are found all over, including Bangkok, Bali, Kuala Lumpur, and Singapore. You can play Trampoline Dodgeball all over now too, including Rockin’ Jump and Amped Trampoline Park in Bangkok, Jumpstreet in Kuala Lumpur, and Katapult in Singapore. Another interesting attraction is carnival-style games at temple fairs, located on the grounds of Buddhist temples across Thailand during certain holidays and festivals.

Etc: You can find jenga here and there: Trevor has played the jumbo Jenga at Utopia in Luang Prabang. At Bottles of Beer in Bangkok they have Liars Dice. X-bar in Siem Reap has pig races in the bar once a year (you can bet on a piglet). We were looking for something to mention in Ho Chi Minh City, and we found something called the Ironman Challenge at Game On Saigon. We’re not sure what the events are, but their website says “if you’re into drinking and drinking games, this is the event for you.” Game on Saigon is a pretty solid pub with pool tables, darts and often has some other games kicking around. If anyone knows where to play skeeball in Asia, you must message us.

Pinball – supposedly Touche Hombre in Bangkok has an old machine. Larry’s Dive used to have an old one too, but I want Aadams Family, something more modern. Very hard to find in Asia. The Silver Ball Planet in Osaka probably has the greatest collection of pinball tables in the world. Londoner used to have a Police Force and then Spiderman. (***After the podcast was recorded I found a link to a blog explaining where to play Spiderman, Family Guy, Pirates of the Carribean, AC/DC, and Transformers Pinball***).