Scaling mountains is a pursuit that attracts some of the world’s most adventurous people. Attempting to climb the world’s tallest mountains within the Himalayas is an entirely other sport. On this episode, Scott and Trevor chat with Billi Bierling, a German who has spent much of her life living, working, and climbing in Nepal, among other Himalayan nations, about her passion for tackling some of the world’s tallest and toughest peaks, including Mount Everest, which she has successfully summited. 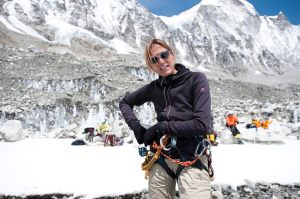 Trevor: Before I moved to Thailand, I really enjoyed hiking and camping, and had done quite a bit in California and New Zealand, particularly. I’ve always found something spiritual about sitting atop a majestic peak and looking out over the land. So, although I’ve never been to the Himalayas I feel that I understand why Buddhists in Tibet (and Nepal) have always considered their mountains spiritual places. I would love to at least visit someday, even if I’m not there to specifically climb.

Scott: I’ve never attempted outdoor climbing and for some reason have never felt a calling. I’ve tried indoor climbing casually a couple times, and while I believed in the equipment, it just didn’t feel right once I got up 10 meters or so. I’d love to be one of those people that could hang off the side of a cliff but it’s just not in me.

Trevor: I grew up in Vermont, and spent a fair bit of my 20s in snow-country, so I still have friends who are in the skiing/snowboarding business. I love back-country skiing and always had to hike to get to the good, remote stuff. I still love following some of my friends who are extreme skiers, scaling incredible peaks and then skiing down. I’d be just as happy taking a helicopter to the top of course, but I can appreciate the rewarding feeling of trekking up there yourself. As for simply climbing just to climb? I’d rather have some skiis strapped on my back so I could enjoy the round trip. 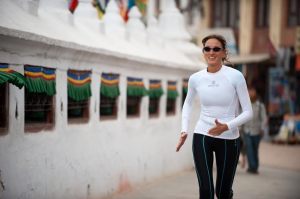 Scott: Around the time the book Into Thin Air came out, I, like a lot of people read it and I was engrossed. While not being a climber, I really got into the story, how disaster struck in large part due to not following self-imposed rules, then went on to read a number of other climbing books. Perhaps some of the appeal is that I can’t understand the mindset to do it, but I also really enjoy the logistics and decisions that are required to attempt a major climb. Some books I’ve enjoyed include Annapurna by Maurice Herzog, The Climb by Anatoli Boukreev, and Touching the Void by Joe Simpson. All captivated me and I’ve always wanted to somehow do a trek to above 6,000m but don’t think I could handle the sheer vertical and drops that are likely involved.

Trevor: Yeah, I saw the Everest IMAX, which was filmed on the same expedition Krakauer wrote about in Into Thin Air. I feel like you need to have some sort of drive to do that kind of thing, to push yourself, like my dad and his friends doing Ironman races. Like I said before, I’ll do the climb so that I can enjoy skiing down afterward; I guess for some people it’s about the challenge of pushing yourself to your limits. My dad used to just bike up mountains and then have us pick him up at the top: he didn’t even want to ride down. It’s an entirely different mentality I guess. 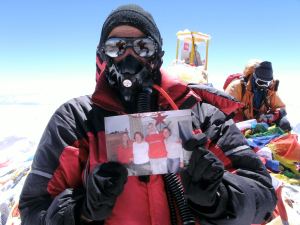 Billi atop Everest with a picture of her family

This episode’s guest: Our guest today, Billi Bierling, climbs more or less full time, is a journalist, and is also legendary Miss Hawley’s assistant in Kathmandu, where she helps officially document climber’s ascents. She has climbed four of the world’s 8,000m peaks: Mount Everest, Lhotse, and Manaslu twice, Makalu, once without oxygen. She’s the first German woman to reach the top of Manaslu, the 8th highest mountain in the world, and also the first German woman to climb Lhotse, the fourth highest mountain on the planet. Over the next 30 minutes, Billi answers the following questions from Scott and Trevor:

Scott: I was lucky enough to meet you quite a number of years ago in Kathmandu when you were training for your first attempt at Everest. Congratulations on summiting! Where are you now?

Trevor: When did you first develop an interest in climbing and how did that interest progress?

Scott: What were some of your first major peaks and how did this interest then progress to climbing in the Himalayas?

Trevor: What is it you love about Nepal and the Himalayan region as a destination?

Scott: Is Nepal and the Himalayas a destination that non-climbers can enjoy?

Trevor: If someone’s interested in trying mountaineering in the Himalayas, but doesn’t really have experience, how can they go about it and what are some good peaks to try?

Scott: Tell us a bit about the experience summiting Mount Everest?

Trevor: What does it look like when you’re way out there in remote territory such as Everest?

Scott: Tell us about one of your most amazing experiences climbing?

Trevor: What should people keep in mind when looking for a tour and operator in the Himalayas?

Scott: What expedition is next for you this coming season?

Check out a Google Map of Himalayan Peaks! 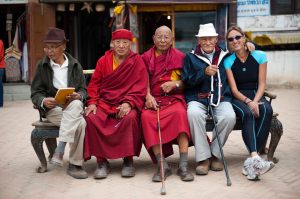 Himalayan Trails is a local Nepali business with an international team. They are perfectly placed to custom design journeys to fit the travel preferences of their guests, who come from all over the world and travel in a range of different styles.  From long adventures to short holidays, they combine the diverse experiences on offer in Nepal with the hotels and transport suited to your way of travelling. From getting out into the mountains or the jungles and experiencing the diverse cultures through trekking, mountain biking or jungle safari, to more leisurely sojourns experiencing the famous hospitality of the Himalayas, they will design the trip for you.