In the aftermath of the recent earthquakes in Nepal, millions have donated to relief efforts. Yet the devastation people have witnessed on TV and social media only tells part of the tale. While back to back earthquakes have undoubtedly caused great destruction in certain parts of the country, much of Nepal remains unaffected, that is, except for an anticipated decline in tourism that is certain to harm an economy that desperately needs tourism revenue. While this reaction is somewhat to be expected, we wanted to chat with someone on the ground who could talk about the unaffected regions, how tourism attractions and activities are still open for business, and why you should travel to Nepal in 2015. 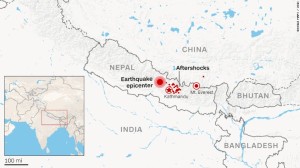 Location of earthquake and subsequent aftershocks in Nepal

To begin the episode, Scott explains how the 7.8 earthquake in Nepal on April 25th, centered in the Gorkha region of the country, mid-way between Kathmandu and Pokhara, killed more than 8,000 people, and left countless numbers without homes, injured, and trying to rebuild their lives. It’s the most powerful quake to hit the area since the 1934, and people have long known that another large one would hit, but it’s impossible to guess when. And then a second major quake at 7.3 shook the country on May 12th, leaving residents even more scared. Will the quakes continue, how can people rebuild their lives, and what role can tourism play in it? We talk about these things on this episode of Talk Travel Asia with our guest Mads Mathiasen, a longtime resident of Nepal.

Check out a Map of areas we talk about on this episode.

Trevor talks a bit about the size of Nepal and draws an analogy about California to explain to listeners how, if an earthquake occurred in San Francisco it wouldn’t affect San Diego or Los Angeles; similarly, there are many parts of Nepal that are unaffected and that people shouldn’t be afraid to travel to these regions.

Scott talks about how he’s been lucky enough to go to Nepal about 8-10 times, many of those leading trips and a handful just for fun. During those trips he’s been lucky enough to do some truly off the beaten track treks, including one in the Gorkha region, and has found a deep appreciation and love for the country and its people. Tourism is one of the largest industries in the country and largest source of foreign capital.

Trevor talks a bit about the country and how tourism benefits Nepali persons, home to nearly 29 million people and hosting roughly 800,000 tourists a year. Scott explains that tourism was responsible for over 500,000 thousand jobs in the country in 2013, but no doubt provides income for many more via trickle-down with tea shops, restaurants, etc. Tourism brought in over $US650 million into the country in 2013.

Scott then introduces their guest, Mads Mathiasen, a Danish citizen, who’s lived and worked in the Himalayan nation for more than a decade. He’s deeply embraced life and the traditions of Nepalis and has led the way in developing breakout tourism ventures in the country. He joins us via Skype from Kathmandu.

Mads first explains when he first settled in Nepal and why. He goes on to talk about the things he loves about living and working in Nepal before talking a bit about how the tourism industry has changed in the years he’s lived there.

Explaining that Mt. Everest isn’t the only attraction in the country, he answers a question from Scott about how last year’s disaster on Everest impacted the country. Mads then talks about where he was when the earthquake struck on April 25th and what the experience was like.

Mads leading a trek in the Gorkha region

As Mads travels extensively around Nepal, he talks a bit about what Kathmandu and other areas he’s been to recently look like. He then talks about the current state of Katmandu and surrounding areas and explains how equipped the country is, at the moment, to handle tourists.

Looking ahead to the remainder of the tourist high season and the upcoming fall, Mads talks about what 2015 looks like for tourism in Nepal. He then explains why people should still come and travel Nepal this year, discussing the geographic diversity of the country and outlining areas that are unaffected and should still be able to handle tourists. He also mentions the impending ‘second disaster’ which will be loss of jobs if tourists don’t come back during the next big season in Oct/Nov 2015.

Trevor suggests that, because tourist numbers are expected to decline this year, that it actually should be a great time to visit, as certain areas will be less crowded with visitors than normal years. Mads agrees but also talks about what people should keep in mind if they plan to visit Nepal in 2015/2016, including certain areas/activities that people should consider visiting and those that they should not.

Check out a Map of areas we talk about on this episode.

Our Sponsor: This episode is brought to you by Beervana. Beervana is a craft beer distributor, importing and distributing tasty American and other specialty beers and craft spirits from across the world.  Now distributing to well over 100 venues in Bangkok and elsewhere in Thailand, Beervana also has the Beer Me smartphone app that can give you info on beer related events, help you find a nearby location to have a craft beer, and through the craft beer club – bring you home beer delivery!